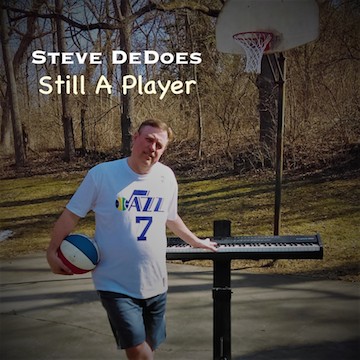 “Nothin’ But Net.” Game-changing new jams join the starting lineup along with hall-of-fame hits from his long career in a fun new CD/album “Still A Player,” by Steve DeDoes (now available online, and for CD order). Head Coach DeDoes is excited, to say the least, to be able to release this one. “I’ve always wanted to put out an album of these ‘athletic’ tracks,” he says. “Because of a lifetime love and involvement in sports, this music is very personal. And,” he adds, “we’ve been proud of some of the places this music has traveled.” With this release, DeDoes hopes to reach even more playing fields, not to mention reaching new fans – of both sports and of great music !

TRACK LIST (&credits) || BACKGROUND || TUNE STORIES
…click on these links for details about the music itself. In this post, we present notable, fun aspects related to these tunes. Steve can’t dunk a basketball anymore (actually…never could ;-). But when it comes to the keyboard, and musical chops, you’ll hear that this stalwart composer, producer, and arranger is “Still A Player” !!

Steve reflects, on a life full of shows, sessions, and games, too: “Music-making has been the primary, most important focus of my life – and has been my career. Maybe my biggest reward has been the collaboration I’ve enjoyed my son at such a high artistic level. But, in addition to our music together, we’ve also had (and we’ve taken) opportunities to pursue some of our other passions.”

We sincerely hope you groove to these sounds – and that you, too, will enjoy all of the journeys that have been part of this music !!!

The rock-fueled anthem “Pickup Game” jump-starts this roster of captivating songs, grooves, and soundtracks.  This exciting opening number was originally written and recorded back in the 90s – and it was updated in 2021 (with additional parts and performances) that amplify a great shout-out about the joys of simply playing basketball.  Steve DeDoes’ friend Mitch is a former college roommate, a fellow basketball maven – and one of the pair of McNeal brothers who founded Gus Macker Basketball. A pioneer, and still today an ongoing enterprise in the business of outdoor hoop tournaments, “The Macker” began back in the 70’s as a home-grown 3-on-3 summer tournament among friends – the ultimate “pickup game”. DeDoes wrote and produced this song for “Gus” after they achieved a worldwide court presence.

Along with the musical contributions that bring new life to this 2021 version, Steve adds some ambient hoops sound effects – and “Macker-level” crowd noise – to elevate the excitement of what is one HOT JAM, and to take you right into the game !

The “basketball jones” continues in the instrumental tribute “IceMan“, for George “IceMan” Gervin. As the photo at right shows, S.D. actually got to PLAY against this iconic hall-of-famer in a 1992 charity game held in Steve’s hometown of Kalamazoo, Michigan. As Steve says today – “I helped hold “Ice” to 35 that night !

“IceMan” makes its musical moves with a smooth, floating melody over a rhythmic, funky groove. In the melodic “hook” of this song, you can’t help but picture the “IceMan” doin’ that “finger-roll” (George’s famous signature shot) !

The evocative jazz composition “Pace of the Peloton” starts out with a catchy, repetitive 7/8 riff that sets a cadence from which the rest of the piece evolves. As in a cycling race, this musical competition/collaboration unfolds as an exchange between Mattie DeDoes (sax), David Taylor (drums), and keyboardist Steve as they take turns driving the group. Many intriguing twists and turns, in the arrangement and the improvisation – ultimately culminate in an exciting drive to the finish, followed by a “cool-down” spin…with each of these riders “trading off” to set the pace !

We’re ALL fans of the local teams – and as we’re lifelong Michiganders, continuing to live and work in the Detroit area, that means that we live and die with the fortunes of our Tigers, Lions, Pistons, Red Wings.  Moreover, we have a deep loyalty to Motown, and the vibrancy that it has always had. The infectious “Detroit Strut” captures the feeling of being in the city – its entertainment district, its nightlife, and its events.

Imagine yourself (pre- or post-pandemic !) heading downtown to take in a game…or a show, or a concert…and hitting your favorite spots before and after. You’re with fellow fans, on a cool summer evening, “strutting” on the crowded streets between arenas, venues, restaurants, and pubs…

The next song is familiar to one and all. But “Take Me Out To The (Swingin’) BallGame” uniquely gets us ALL ready for baseball season, paying homage not only to the classic anthem but also to Satchel Paige, “Satchmo” Armstrong, and dixieland-style jazz. So, kick back and enjoy “StrongArm Satch and the All-Stars of Swing,” in a recording that was originally released in the early 2000’s. This classic take was published as part of a volume of ballet and tap dance soundtracks (“Hitting Your Mark”) by Dallas-based Move&Learn.

You’ll note that we present TWO versions of “BallGame” in this album: each a very different arrangement, for distinctly different purposes (more below). This one, however, swings for the fences ! 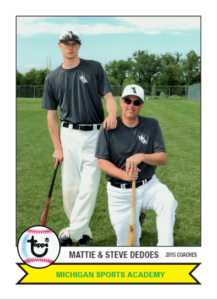 In a number of the tracks of “Still A Player,” you hear the incredible musicianship from Steve and Mattie (saxophone) DeDoes. However, SPORTS was another serious endeavor for so many years. As Mattie pursued baseball and basketball, along with his horn (not to mention physics and engineering degrees, too), Steve (former athlete himself) reestablished himself as a coach in those two sports. Mattie starred in high school and then college; as for Steve – doing much less travel for show work, and producing more from his studio – he committed himself to an extensive tenure of athletic coaching and mentoring. Over a couple of summers, after Mattie’s career as a collegiate baseball player/pro prospect, both DeDoes’ were concurrently part of the stable of coaches within the renowned Michigan Sports Academy.

While BASEBALL ultimately became Mattie’s #1 game, BASKETBALL remains a parallel love for both. Steve’s years with the sport even saw him serve Michigan Basketball as a coach for a few years, working primarily with summer programs. And around that time (2006), he sat down to construct a unique musical “take” in an arrangement and recording of “SGB” (Sweet Georgia Brown).

For decades, this song has enjoyed a strong association with the game of basketball, serving as a soundtrack for the Harlem Globetrotters and for hoops creativity. Steve’s arrangement opens with a “blast from the past”, whistling the melody over a tack-piano accompaniment…before breaking into a horn-fired, Latin-funk groove. After hearing this, players of all ages will grab the ball out of the closet, spin it on their fingers, and channel their inner “Pistol Pete Maravich” (Jazz #7, BTW) !

Sports music – in spite of the typical norm – doesn’t have to be limited to a simple, limited expression of a rap groove or rock beat. As with any dramatic arc, the story of a great game, season, or ultimate triumph usually involves more complexity. To communicate a story within a film, or in an orchestral composition, a theme is often stated, and then developed in clever ways in order to convey a sense of the journey traveled. Track #7 of “Still A Player” is such a soundtrack. Presented on the CD as “The Game Begins…Nowhere To Hide” – it’s titled in the online release as “The Moment Has Arrived“.

The song “Nowhere To Hide” was originally composed as a theme for a film by/for the United States Air Force (“Project: GoldPan”) that was produced in 1996. This instrumental arrangement of that song (featuring Chris Collins on saxophones) wonderfully sets the anticipation, builds the tension, and culminates in the drama of “the big game” !!

Almost unbelievably, Steve met Muhammad Ali on a baseball field once upon a time in Battle Creek, Michigan. Ali’s son happened to be playing in a tournament game against Mattie (then age 13).

Growing up in the 1960’s and 70’s, Ali was to me (and to all of us) larger-than-life. Always in the company of huge throngs…joined by kings, presidents, and stars of the highest magnitude…the center of attention on the world stage. But all of a sudden, on a summer’s day in August 2004, HE APPEARED. To say the least – Steve couldn’t contain himself, making like Drew “Bundini” Brown in stirring up a frenzy among those in attendance. DeDoes recalled how – at the end of the famous “Thrilla in Manila” – Ali said from a tired stool – “Joe Frazier is ‘The Greatest of All Times’, next to me.” On that afternoon in Michigan, Ali couldn’t help himself in entertaining the crowd, stealing the attention from the baseball games. For 20 minutes, The Greatest then fended off fans as he sat and painstakingly drew Steve a picture, and signed it to him…what a memento ! And so here he is — “next to me” !

The “title chase” from the previous track continues in track #8 on the CD (not available online). “To The Next Level” is a high-energy, guitar-fired, “show-stopper” bonus for those listeners who get a CD of “Still A Player”. While this track was originally composed and produced for other commercial purposes, Steve always felt that the inherent drive was a natural as a sports-related soundtrack.

To close out “Still A Player,” Mattie and Steve DeDoes are honored to present the perfect 9th inning. “BallGame Farewell” is a reflective, stirring version of “Take Me Out To The Ballgame”, recorded in 2013 for a very special purpose.

This solemn, thoughtful version was commissioned from the duo by filmmaker Tim Reid. Reid was in the process of producing a video tribute to honor the passing earlier that year of baseball legend Stan Musial (see video: link to a 2018 post). As you can see and hear, this music served as a great framework for Reid’s homage to “Stan The Man.”